I'm a radio ham, computer hobbyist, and organist in South Central Indiana. This site is where I'm putting things on the Web these days.

I work as a mechanic in the service department of a large outdoor power equipment dealership -- more on this soon.

I am working on a system to make installing updates into this site easier. My quality standards for writing that I put onto the public Internet are also being dropped, in hopes of generating more posts.

I don't want the writing here to seem overly abstruse or highfalutin, even though the academic rigor is hammy-hambone level. I'm writing for myself and other radio amateurs. My pipe organ writings will likewise assume pipe organs are in your wheelhouse. 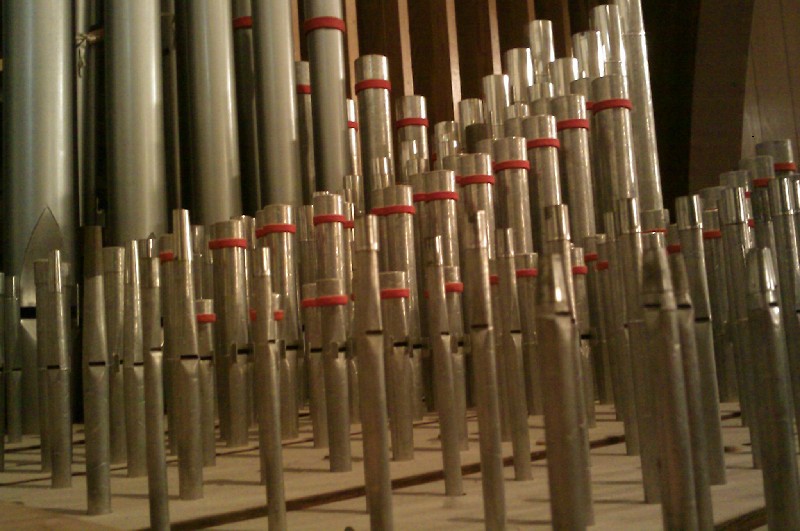 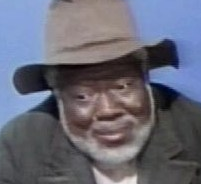 Could this be the start of a new hypertext version of the URFC?

What is being worked on now?

There is an exciting new local frenzy of 10 meter activity, which I am writing posts about.

A writeup on best practices in mobile power wiring is being drafted. This is a very controversial issue. Let's take a careful look at this negative lead fusing business.

General functionality, safety, and performance of my land mobile HF station are being actively improved to prepare for tests of low-bitrate digital voice on the 12, 10, and 6 meter bands.

Organbulding activities have been postponed again, with plans to resume mid-summer. The world has conspired against my work on it in many ways lately. Infrastructure improvements will have been made before the project is resumed.

A secret project for a new amateur radio packet network is in early stages.

When local 2-way radio is mentioned, we usually think of high-band VHF and UHF. Except for Citizen's Band, you seldom see any land mobile 2-way equipment south of 144 MHz being used for local communications these days. Common sense would say that smaller antennas, pressure from vendors, and better building penetration for portables would have obsoleted low band equipment.

Many state police and highway patrol departments used low band equipment to maintain simplex communications over many tens, if not over a hundred miles. Although a problem for public safety users when skywave propagation was open, low band systems are often remembered for their simplex distance performance. Some states, like that big one on the west coast, insist on keeping their low band systems, actually putting pressure on a vendor or two to keep selling and supporting low band equipment.

While lowband systems are not without their challenges, frequencies around the 10 and 6 meter bands have some desirable characteristics for local, vertically polarized communications. Lower frequencies can overcome certain kinds of path attenuation that occur in suburban and rural areas. Unfortunately, in populated areas, these bands are plagued with high levels of local noise, making analog voice unsavory.

Fortunately, most amateur transceivers that cover these frequencies have single sideband, meaning that low-bitrate digital voice can be used. I am interested in doing a viability study of FreeDV on 6 and 10 meters for local, vertically polarized simplex.

Conveniently, other radio amateurs around the county have interest in using 10 meters for local communications. Many of these hams have horizontal, multi-band dipoles which can be matched on 10 meters, making it possible for them to get on air in a pinch, and we find they can communicate reasonably well across town and somewhat beyond. Yes, even with these antennas that are designed for skywave communication, the SSB mode makes local analog voice communication possible with sub-optimal antenna setups. Imagine what could be done with purpose-designed antenna systems and low-bitrate digital voice, given how successful the SSB tests have been.

On this Thursday evening, there was a most excellent round table on 10 meter SSB. Stations from all over the county were able to communicate, with power levels ranging from QRP to a kilowatt, on mostly horizontal antennas. I was the only vertical station, in my mobile, putting 120 watts PEP into an SGC-303 -- more about this setup later. In my opinion, this exercise served as a proof of concept, and reiterated to all of us the potential for high-quality local communications in this frequency range. Better yet, my interest in experimenting with FreeDV was well-received, as many of us are already familiar with the mode.

While this post is in part to recognize and further encourage the interest in frequencies below 54 MHz for local use, it's also to propagandize for the building of suitable antenna systems, and to guide our technical thinking. Skywave antennas are good, and every ham should have several, but another good antenna to have is a 10 meter vertical. However, misunderstandings about propagation seem common, especially where local use of HF bands is concerned.

'All models are wrong, but some are useful.'

"I think I'm hearing you on groundwave, old man!" says a fellow on 40 meters. Let's clear up groundwave first. The groundwave effect becomes extremely weak north of 3 megahertz, which is to say that even 80 meters doesn't profit much from it. Groundwave is most useful for MF emissions, like the amateur 160 meter band or broadcast AM radio. During the day, 160 meters can be used for local communications, which is very interesting but somewhat outside the scope of this discussion on the 25 to 55 MHz area. Add 'local 160 meter communication' to your list of things to try out.

Now that we've established that groundwave propagation is not relevant to local (or any) use of high HF and low VHF, lets throw out a few other irrelevant kinds of propagation. NVIS, near-vertical incidence skywave, is a useful communication technique that quickly and unfortunately gives rise to snake oil pitches by unscrupulous ham antenna vendors. Again, the frequency governs whether this technique is useful at all, and these days, it seems seldom usable above 5 megahertz or so. This is to say that you should only expect 80 and 60 meters to provide NVIS communications with a cloud-warmer antenna (low to the ground dipole, vertical firing wire beam?). Good NVIS is also probably near impossible from a mobile, but commercial users of HF with more exotic antenna setups probably have a better understanding of this.

Like groundwave, NVIS has no place in this particular discussion, although it is terribly interesting and perhaps useful if attempted in earnest. NVIS is just a particular kind of skywave propagation, and waves with more glancing angles of incidence make up most of the activity we hear on HF from day to day. Much of the interest in NVIS stems from its short-distance capabilities, but it's seldom closer than 60 to 80 miles in practice, I'm told. Since most skywave communication is considerably further than this, we can throw it out of the discussion as well.

The closest possible range of skywave overlaps with the furthest easily practicable (and unaugmented by skywave, E-skip, tropo. ducting) range of hi-HF and lo-VHF stations. Setting up consistent, robust communications has always been a theme of my radio activities, and the thing that makes this challenging locally is the huge variance in terrain (attenuation, reflection, diffraction): urban, suburban, and rural alike! The propagation we are actually concerned with is often called line-of-sight, but is perhaps better called extended line-of-sight, or perhaps near or non line-of-sight.

The Fresnel zone is a 3-D elliptical region between the antennas of two stations. Obstructions in the Fresnel zone cause multipath propagation, which can result in destructive interference. 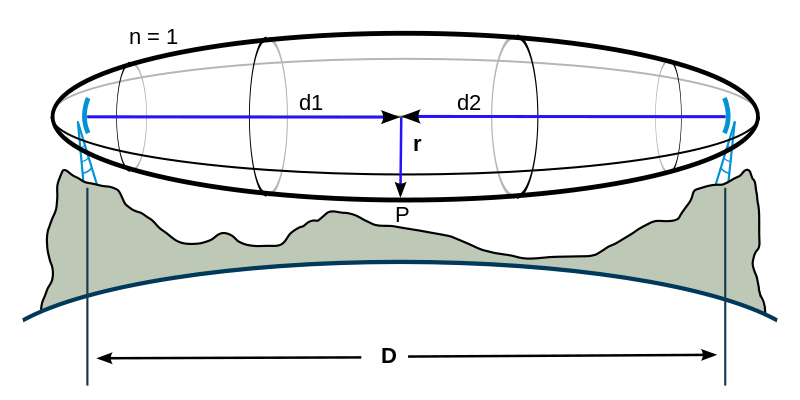 In practice, the Fresnel zone is seldom clear of obstructions between a transmitting and receiving antenna. In absence of visual line-of-sight, the link can be closed by the reflection and diffraction of waves from local objects, such as buildings, bridges, et cetera. Objects that are good conductors can reflect easily, and objects that are good insulators have little effect on radio waves, but materials that are somewhere in between (earth, vegetation) can cause significant attenuation. For example, in urban environments, Wi-Fi and mobile phones depend on passive reflections. Consider how perceptible the change in local UHF performance is when the trees shed their leaves in fall.

The wavelength relative to the dimensions of path obstructions is of great interest to us, as this governs whether signals will be reflected or attenuated according to the permittivity of the each obstructing object. For example, I've found the 2 meter path from a base to a mobile might be choppy and inconsistent while the 10 meter path is an armchair copy. So in the NLOS environment of local communications, a longer wavelength can get us some advantage. Again, imagine this advantage combined with improved antennas and low-bitrate digital voice.

Obviously, I don't suggest that 10 meter activities should supplant any other, but rather augment our existing local communications as a diversity solution. We're in an exciting time for amateur repeater infrastructure, building the Tower of Babel and all, but simplex can be an equally exciting frontier.

Let's talk antennas, at long last. Local communications are overwhelmingly vertically polarized. Without even venturing into antenna theory or propagation, it's easy to understand why vertical polarization makes a reasonable standard: consider mobiles and portables where a Hertz antenna (much less a sideways one) is a fool's errand. At the present, I do not know whether there is anything about vertical polarization that is inherently better for local use, or if it's just a matter of converging on a standard to avoid the attenuation of mismatch.

Fortunately, vertical 10 meter antennas are easy to construct and not overly unwieldy. Of, course, there is the ground plane antenna with elevated radials, which is very effective but takes up considerable area. A vertical dipole is an appealing low profile solution. The next post will talk about antenna system details and construction ideas. Another germane topic for future exploration is 'diversity polarization'.

Some Discussion on Antennae

I'm sure I don't need to remind anybody about our lazy, good-for-nothing Sun. It's possible that in our lifetimes, we will never again see the the ionization levels of previous cycles, as the pessimistic take is that we're heading for a period like the Maunder Minimum. However, the radio amateur, equipped with privileges all over the electromagnetic specturm, will continue to adapt his tehnique to limitations imposed by nature and circumstance. Despite the MUF, we still enjoy anomolous propagation such as E-skip, but not all day long. When skywave and E-skip are closed, 10 meters can be considered a local band.

I must warn that in practice, we must be careful to avoid interference with weak signal work when using 10 meters locally. It is very possible to QRM an ongoing QSO and not even be aware of it, so care must be taken to check if the frequency is in use before setting up shop, and we would all do well to avoid weak signal sub-bands. This being said, 10 meters is a fine place for some local A-1, fine-business operators to chew the rag. It's of cultural importance that this spectrum is a neighbor of the Chicken Band. If their splatter is outside of amateur privileges, it is best to let them alone, but if their emissions come north of 28 megahertz, DF the bastard and pin his coax report the interference to the FCC.

If your spousal, rental, or HOA circumstances allow, and you like to buy things, just put up an Antron 99 and let your radio's built-in autotuner or your transmatch figure it out. For bonus points, use good quality coax (but not too good becuase that would be silly). If a commodity solution isn't your style, then build it yourself. If you have the space, a 1/4 wave ground plane antenna with 4 elevated radials, sloping down at 45 degrees, is a good performer for local use and is easy to build with found materials.

I can tell you from my 11 meter days that a 1/4 wave vertical with an elevated radial plane is a good performer locally, even if the HAAT is not the best. Of course, any LOS or NLOS link will profit from greater HAAT, and we should strive to put such antennae as high as possible. What I know less about is the performance of vertical dipole antennae